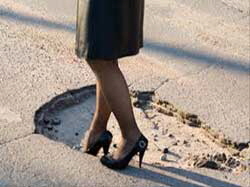 HOUSTON — A Harris County man is suing a trailer lot company, alleging he tripped and fell in a pothole on the defendant's property.

According to the complaint, Griffin was invited guest on Secure Trailer Lots' property, 8361 Liberty Road, Houston, on Jan. 9, The suit alleges as he was trying to avoid traffic around him, Griffin tripped and fell into a large pothole.

The plaintiff alleges due to the defendant's negligence and awareness of the pothole hazard, he sustained serious injuries, pain and suffering and medical expenses.

Griffin seeks court costs, interest, monetary relief up to $75,000 and all other just relief. He is represented by attorneys Donald K. Mestemaker, Norman Straub, Jonathan B. Zumwalt and Codi K. Kraus of Mestemaker, Straub & Zumwalt in Houston.