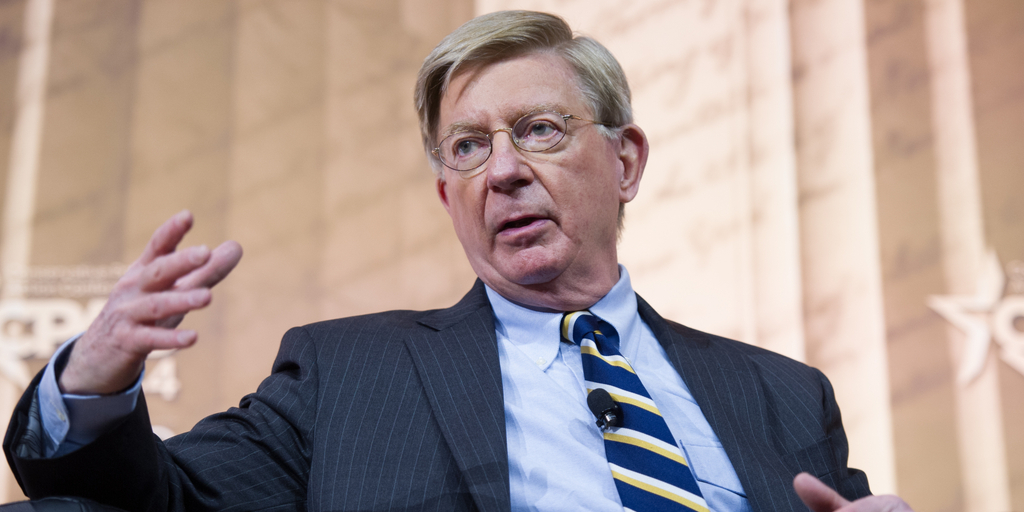 As flattered as I was to attract George Will’s attention—in his 4th of July column, no less—being criticized by a Pulitzer Prize-winning essayist left me somewhat perplexed, for several reasons. Allow me to explain. First, although I have engaged Will directly in the past, he used his nationally-syndicated column to take issue with something I had written in response to someone else—specifically, Ed Erler (a disciple of Harry Jaffa) regarding Robert Bork’s view of the Constitution. My disagreement with Erler centered on whether (as Jaffa contended) the Declaration of Independence infuses the Constitution with transcendent principles of “natural rights” or “natural law” that judges must enforce to limit the actions of representative government.

Second, Will’s joining forces with Erler/Jaffa concerning the Declaration as a fount of natural rights is highly ironic because the theory Jaffa midwifed leads in two diametrically opposite directions: Erler/Jaffa construe “the Laws of Nature and of Nature’s God” referenced in the Declaration as embodying fixed and immutable principles of 18th century morality—forbidding, for example, the legalization of abortion or the validation of same-sex marriage, even by legislation. Will, by contrast, adopts the libertarian theory of natural law (advanced by Timothy Sandefur in The Conscience of the Constitution, among others) that confers on all citizens the unenumerated right to be free from majoritarian interference—that is, laws enacted through democratic self-rule. (The Sandefur theory looks suspiciously like a Randian state of nature, not the popular sovereignty—“consent of the governed”—demanded by the Founders.)

I am hardly the first person to point out the shortcomings of the Jaffa thesis, which is the third reason for my consternation at being singled out by Will. In addition to Bork, originalists who reject the primacy of the Declaration include Antonin Scalia (in his Troxel v. Granville (2000) dissent and elsewhere), Michael McConnell, Lino Graglia, Lee Strang (author of a recent article in the Harvard Journal of Law & Public Policyentitled “The Declaration of Independence: No Special Role in Constitutional Interpretation”), Walter Berns, Russell Kirk, historian Kevin Gutzman, M.E. Bradford, and many others. Indeed, on the Right the proponents of natural law as a guide to constitutional decision-making overwhelmingly tend to fall into one of two camps: either disciples of Jaffa (sometimes referred to as “Claremonsters”), or libertarians (each of which, as mentioned earlier, apply natural law to reach widely divergent conclusions). Virtually all serious originalist scholars not associated with one of those two camps reject the Jaffa thesis.

The appeal of “natural law,” like that of all non-originalist theories, lies in its subjective and indeterminate form—natural law means whatever its proponents want it to mean. As Bork prophetically stated in a 1982 essay in National Review, “The truth is that the judge who looks outside the Constitution always looks inside himself and nowhere else.” Not everyone is happy with the policy choices embodied in the Constitution, or in the laws enacted by state legislatures, and Congress, pursuant to their constitutional authority. Those who are dissatisfied can seek the repeal of laws with which they disagree, or amendment of the Constitution to compel a different outcome, but these options are difficult and uncertain. Or the dissatisfied minority could resign themselves to the decision of the democratic political process. In a system governed by majority rule, one will not always be aligned with the majority.

Ideologues discontented with democratic rule sometimes choose a different option: They resort to creative constitutional theories that conveniently produce the objectives they desire—inviting unelected judges to impose policies they find congenial, regardless whether the Constitution or laws dictate such a result. Alas, George Will—once a stalwart conservative—has undergone a libertarian epiphany and now embraces this result-oriented sophistry. Will advocates natural law, drawn from the rhetorical well of the Declaration, to justify the libertarian political philosophy he has now adopted. His Foreword to Randy Barnett’s 2016 book, Our Republican Constitution, is a paean to counter-majoritarian rule—an activist judiciary enforcing unwritten “rights” to be free of external constraints. (Ed Whelan calls Barnett’s theory “a fantasy libertarian constitution.”)

Earlier in his career, Will sensibly rejected such nostrums. Once a self-proclaimed Burkean conservative—a “Tory,” even—Will eschewed free market economics as a substitute for political philosophy. He was mindful that a virtuous society is indispensable to the maintenance of ordered liberty, and that government plays an essential role in cultivating moral values. In his Introduction to The Pursuit of Virtue and Other Tory Notions(1982), Will quoted Burke in this regard: “Manners are more important than the law.” Will warmed to the topic in a later essay, declaring that “Real conservatism requires strong government.”

Describing the overriding aim of liberalism as the “expansion of liberty,” Will advocated instead a sharply-contrasting model of conservatism:

"Real conservatism is about balancing many competing values. Striking the proper balance often requires limits on liberty, and always requires resistance to libertarianism (the doctrine of maximizing freedom for private appetites) because libertarianism is a recipe for the dissolution of public authority, social and religious traditions, and other restraints needed to prevent license from replacing durable, disciplined liberty. The truly conservative critique of contemporary American society is that there is too much freedom—for abortionists, pornographers, businessmen trading with the Soviet Union, young men exempt from conscription, to cite just four examples. (Emphasis added.)"

As a conservative, I must say that I find Will circa 1982 far more persuasive than the 2019 iteration. The “balancing of competing values” is called politics, and is expressed by representative self-government—elections, legislation, and other manifestations of a democratic republic.

At some point, Will lost faith in these institutions, and has chosen to take refuge instead in the theory of “judicial engagement,” essentially government by what Learned Hand called “a bevy of Platonic Guardians.” Even a public intellectual is entitled to change his mind, but in Will’s case he has made an abrupt U-turnrather than a slight course correction. Will now enthusiastically embraces positions he once publicly—and thoughtfully—abhorred. By quarreling with me, Will is really arguing with himself. He was, I submit, right the first time.

Want to get notified whenever we write about Citizens for the Constitution ?

Sign-up Next time we write about Citizens for the Constitution, we'll email you a link to the story. You may edit your settings or unsubscribe at any time.

Citizens for the Constitution