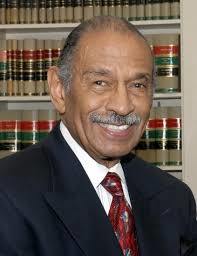 Posted on ThePopTort.com on Nov. 5.

Yesterday (Nov. 4) was the funeral for former U.S. Representative John Conyers, who died last Sunday. A “lineup of political, entertainment, religious and sports leaders” paid tribute to him and his “remarkable 53-year” tenure in Congress, where he “compiled a near-record legacy of civil rights activism, longevity and advocacy for poor and underprivileged people.” But to us, he was also a civil justice hero.

Here are three instances where John Conyers stood up and stood out in a way that was truly unparalleled on Capitol Hill.

1. On February 11, 2003, when Republicans were running Congress and were pushing federal legislation to drastically cut the legal rights of medical malpractice victims, we brought some 50 families from 26 states to DC to lobby against the bill. Mr. Conyers decided he wanted to give some official voice to these brave people.  So he decided, on his own, to hold a House Judiciary Committee “rump” hearing. “Rump” because he was the ranking member – not the chairman.  He had no real power to hold a hearing. Nonetheless, he was able to get a hearing room in the Rayburn House Office Building, organize a forum over which he presided, allowed each one of these survivors to testify and tell their story, and got C-Span to cover it live. He began with these modest remarks:

Good morning, everyone.  We're meeting here today with friends from on and off the Hill about medical malpractice.  It's a forum, and we're going around the room just so that everybody -- I'm sorry I can't offer everyone coffee and doughnuts or brunch or whatever happens at this hour of the day in your area.

We want to kind of get to know who's talking besides just a name, and so I want to introduce myself as John Conyers from Michigan.  I'm on the Judiciary Committee.

And so it began.

It went on for hours, with some of the most moving testimony we – and committee members – had ever heard.  Senators and Members of Congress told us repeatedly that the efforts of these survivors were a major factor in finally stopping the bill. This hearing was part of that.

2. Upon release of the Center for Justice & Democracy’s 2004 study, “Tort Reform” and Racial Prejudice: A Troublesome Connection, Mr. Conyers spoke out about this issue in a way that few others on Capitol Hill would dare. He explained in a news release, “The dirty little secret of the so-called tort reform movement is that it is premised on racist notions, and would have a massively disproportionate impact on African Americans, Hispanics and other minorities.… The restrictions on non-economic damages included in the Republican medical malpractice [bill] will also have a severe and disproportionate impact on minorities.” He was right. And as noted above, the legislation was eventually stopped.

3. Finally, in 1997, Congress passed the Volunteer Protection Act, which immunizes nonprofit volunteers from negligence.  In a last-minute move, Congress exempted from the federal bill’s scope immunity for volunteers of hate groups.  In other words, anyone volunteering for a group like the Ku Klux Klan, let’s say – which is a non-profit organization – cannot be insulated from liability under federal law.

But while articulating a clear congressional policy to make hate group volunteers fully liable for their negligence, Congress refused to close the preemption loophole that allows states to immunize them instead -- even if they do so inadvertently.  Mr. Conyers was the one most concerned about this oversight and he tried to correct it.  He brought it to the attention of his fellow legislators, who promptly ignored him.

In dissenting remarks to the House of Representative’s report on the bill, Conyers and his Democratic colleagues quoted directly from a May 16, 1997, letter from the Southern Poverty Law Center explaining the significance of this problem:  “Under this legislation … a state could maintain or reinstate protections for volunteers of white supremacists, neo-Nazi and violent militia groups – the types of organizations the Southern Poverty Law Center has crippled over the past ten years through the use of both federal and state tort laws.” As Conyer’s put it, “if a particular state provides across the board immunity to volunteers, [the federal law] continues to allow a member of a militia or hate group who negligently entrusts a gun to a child (who in turn harms an innocent victim) to avoid responsibility for negligent entrustment.  This is not appropriate.” Indeed.

While Mr. Conyers has been out of Congress for a couple years now, it’s still hard to believe he’s gone. His voice is already greatly missed. Rest in Peace.

Want to get notified whenever we write about U.S House of Representatives ?

Sign-up Next time we write about U.S House of Representatives, we'll email you a link to the story. You may edit your settings or unsubscribe at any time.