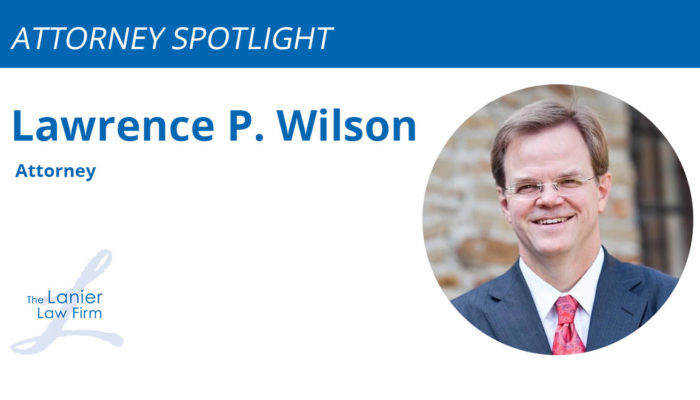 From The Lanier Law Firm

Each month, we like to feature one of our attorneys to help you get to know our team better. We sat down with one of our Houston attorneys, Larry Wilson, to talk about his background in the legal field and what he is currently working on.

What led you to a legal career?

With regard to going into law, I always enjoyed publicly speaking and believed that I could be an effective advocate if I went into law. To Kill a Mockingbird and similar films also moved me toward an interest in law.  I was on a speech team in high school with Mark Lanier and his wife, Becky Lanier. The three of us, and many from that speech team, ultimately became attorneys.

What has been your most interesting or memorable case and why?

One of my most memorable cases was a medical malpractice case that I tried in San Angelo, Texas many years ago. At the time, no one could recall anyone having won a medical malpractice case in the county. Leading up to trial, the hospital was taking out daily full-page ads in the local newspaper touting its good citizenship. My local counsel was unwilling to sit at the table with me because of the political costs. San Angelo’s Community Hospital was offering my client less than desired for the complete loss of vision in her remaining good eye. Their offer was low because she was 87 years old and the hospital never believed a local jury would award a large verdict against them. The jury ultimately awarded about 6 times the settlement offer.

It is not the biggest verdict of my career, but the case stands out because of what transpired in a sixty second window while the jury was on recess. While the jury was out, a court employee brought me a message from the judge encouraging me to settle for the lesser amount. While I was wrapping my head around it, the bailiff came to tell me that my client’s 90 year old brother, who had been at trial to support my client, had just died in a single car accident as he was returning home. The bailiff thought it best that I break the news to my client. As I walked slowly back into the court room to share this news with my client, the jury buzzer sounded. The verdict was in.

There was very little joy from that verdict. But the case taught me something about jury trials. They are often costly in ways that people never imagine, even if you win. In the course of that litigation, my client lost a son (for reasons both she and I believe were related to the stress of his mother’s blindness) and then at trial she lost a brother. Obtaining justice is rarely easy and more often than not costly to the one who seeks it.

What litigation are you currently working on?

What are one or two things about you that most people don’t know?

I grew up in Lubbock where I attended high school with Mark Lanier, Becky Lanier and Kevin Parker.  At one time or another, we were all on the same speech team and as you might imagine we won a lot of tournaments!  I am a very good snow skier and taught Mark Lanier how to ski, though he is very under-appreciative of my talents as a skiing teacher.

Want to get notified whenever we write about The Lanier Law Firm PLLC ?

Sign-up Next time we write about The Lanier Law Firm PLLC, we'll email you a link to the story. You may edit your settings or unsubscribe at any time.