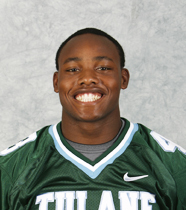 A trial over the fatal freeway crash that ended the life of a college football player recently ended with jurors finding in favor of the defendant.

Jennifer claims that on Jan. 21, 2010, around 5:30 a.m., Sule was traveling on Interstate 10 in Beaumont on his way home to visit his mother, Jennifer, who lives in Houston.

According to the lawsuit, Aguilar entered I-10 at the MLK ramp and soon came into “dangerously” close proximity with Sule’s vehicle, forcing him to perform a “faulty evasive maneuver” and swerve and crash into the freeway barrier. Sule swerved to avoid the crash and hit the inside left shoulder barrier, causing his vehicle to roll several times and eject him.

Sule, who was a student athlete at Tulane University at the time, died instantly at the scene of the incident, the suit states.

However, jurors found Sule the sole negligent party in causing the collision, according to the court’s charge to the jury, filed Dec. 19.

A linebacker, Sule was in his sophomore year. He played in seven games as a freshman in 2008 and had seven tackles. He missed the 2009 season after injuring his neck.

Sule’s mother, Jennifer, unsuccessfully asked jurors to award her money for her loss of companionship and mental anguish.

Attorney Leigh Montgomery of the Young & Husain law firm in Houston represents her.