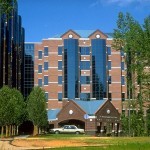 TEXARKANA - The family of an 18-year-old woman has filed a lawsuit that claims the new mother received negligent medical care that resulted in a permanent brain injury.

According to the suit, in December 2010, 16-year-old Mayra Torres presented to Christus St. Michael Hospital in Texarkana at 41 weeks gestation with contractions.

After two hours of labor without progression, it was decided that a Caesarian section would be performed. She received an epidural for local anesthesia but the epidural catheter became dislodged, according to the suit. Torres then received a spinal anesthesia.

The plaintiffs claim that the dose of anesthetic used during the delivery was excessive and a smaller dose should have been given.

The plaintiffs are represented by Laurie M. Higginbotham, Jamal K. Alsaffar, and Tom Jacob of Archuleta, Alsaffar & Higginbotham in Austin. A jury trial is requested.