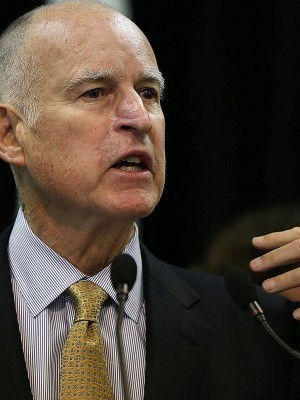 SACRAMENTO – California Gov. Jerry Brown says the attorneys general of West Virginia and Texas are guilty of “crass obstructionism” as they seek to gain momentum against President Obama’s environmental agenda.

“There are significant legal limits on (President Obama’s) ability either to carry out the promises he has made in advance of Paris 2015 or to enforce any agreement arising out of the summit,” Morrisey and Paxton wrote.

Morrisey and Paxton urged Kerry to acknowledge the centerpiece of President Obama’s domestic strategy to reduce carbon emissions – the so-called Clean Power Plan – is unlikely to survive judicial review in the face of lawsuits brought by more than half of the states.

But Brown, a Democrat, said the two only are trying to score political points with their comments.

"Frankly, your thoughts here are, at best legally flimsy," Brown said in his letter to Morrisey and Paxton. "At worst, you're sending a dangerous message to the world: on climate change, do nothing.

Morrisey and Paxton, who have led lawsuits against the EPA, outlined their concerns in a letter to Kerry and copied to other officials, including Obama, congressional leaders and leading foreign negotiators from Britain, China, France, Germany, India and Russia, as well as others representing the United Nations and European Union.

In their Nov. 23 letter, the attorneys general described arguments against the plan as strong and numerous. Their letter specifically cited U.S. Supreme Court case law in calling the EPA’s reliance upon Section 111(d) of the Clean Air Act as mistaken. It also noted the EPA cannot force states to reorder their energy policy and argues the plan would violate the 10th Amendment.

Aside from the Clean Power Plan, Morrisey and Paxton insisted any agreement arising from Paris 2015 will be legally non-binding unless it is ratified with a two-thirds vote of the U.S. Senate.

The attorneys general believe any attempt by Obama to ratify a Paris 2015 accord through executive agreement would be clearly unlawful. They believe Senate ratification preserves some power for the states.

“These serious legal questions are of great importance to the States,” Morrisey and Paxton wrote. “We expect our federal representatives to respect that system of dual sovereignty both here at home and in negotiations abroad.”