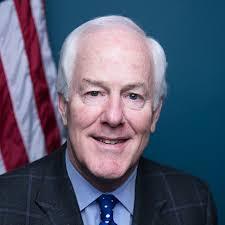 As a longtime supporter of Senator John Cornyn, I was grateful to read about a bipartisan bill he introduced alongside Senators Feinstein (D-CA) and Van Hollen (D-MD). This bill, the Preventing Online Sales of E-Cigarettes to Children Act, was introduced in hopes of reversing the recent trend of teens and minors vaping.

Teen vaping has caused the rate of teen smoking to skyrocket, after decades of the rate declining. Worse yet, the long-term health consequences of using e-cigarettes and other vape products are still unclear. Just last month, the Houston Chronicle reported on 8 teens that went to a hospital in Wisconsin with severe lung damage from vaping.

The public health of our next generation should be of the utmost importance to our elected officials, and thankfully Senator Cornyn is taking the lead and offering real solutions to address the teen vaping epidemic.

His bill was introduced in April and contains many components that would make it more difficult for teens to buy e-cigarette products online. Addressing the online sales of e-cigarettes is critical because almost a third of teens who bought these products themselves reported buying them online.

One reason this bill is necessary is because the law that originally designated the process for delivering tobacco products, the Prevent All Cigarette Trafficking Act (PACT Act) was passed in 2009, before e-cigarettes and other vape products became common. The PACT Act hasn’t been updated since, and it's long pastime that our laws catch up to current technology.

Currently, the standard operating procedure for most online sales of tobacco products including e-cigarettes is to require online age verification before purchase. This is codified in Senator Cornyn's bill for e-cigarettes, which will certainly help. But we must go further because of the ease at which underage teens can bypass the system and make purchases.

Thankfully, this legislation also includes provisions that would have a significant impact on limiting teens’ access to e-cigarettes. For example, it would require delivery drivers to check the ID of whoever is receiving the package before handing over these products. This component is key because currently e-cigarettes and other vape products can be dropped off at a home with no proof that the person who will pick up the package can legally use the product.

Thanks to Senator Cornyn’s leadership on this issue, we are finally seeing progress. In July, a bipartisan group of Congressman introduced the same Preventing Online Sales of E-Cigarettes to Children Act legislation in the House. The House version of this bill has co-sponsors from Republicans and Democrats from across the country, showing the wide diversity of support for this issue.

While Senator Cornyn has done the right thing by introducing this legislation, we are still counting on other elected officials like Senator Lindsey Graham, who is chairman of the Judiciary Committee where this bill is awaiting a hearing, and Senate Majority Leader Mitch McConnell, who recently came out in favor of legislation that would raise the legal age to purchase tobacco to 21. Given this, I remain hopeful that the Senators will support the Preventing Online Sales of E-Cigarettes to Children Act, and allow it to pass the Senate quickly. Our children depend on it.

Alicia Giordiano is a mother of three in Houston and a certified yoga instructor.

Want to get notified whenever we write about CORNYN FOR SENATE ?

Sign-up Next time we write about CORNYN FOR SENATE, we'll email you a link to the story. You may edit your settings or unsubscribe at any time.