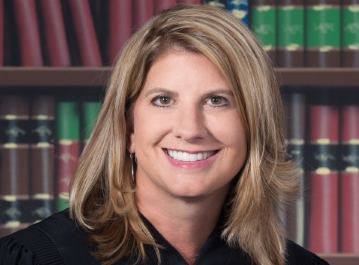 Before the turn of the century, thousands of plaintiffs filed asbestos lawsuits at the Jefferson County Courthouse, leading to the designation of four of the county’s district courts as “civil” courts.

And although asbestos cases still trickle in, it’s nowhere near the volume the courthouse saw in the early ‘90s.

Dividing criminal and civil dockets between the courts wasn’t the only change back then.

The county’s Drug Impact Court was established in 1993. And from its creation, the late Judge Larry Gist presided over the court until his recent illness and passing.

Judge Mitch Templeton, who presides over one of the county’s civil district courts, says at its founding the Drug Impact Court was funded by a grant, which played out around 15 years ago.

“It is my understanding the court is funded completely now by Jefferson County,” said Judge Templeton, adding that there are approximately 800 cases currently pending in the Drug Impact Court.

“A lot of people don’t know that the drug cases equal the amount of cases that Judge Stevens and I hear,” said Judge West. “There’s no way we could absorb all of those cases.”

According to Judge West, three of the four county’s civil district courts will now hear the drug cases, a list that includes Judge Templeton of the 172nd, Judge Justin Sanderson of the 60th, and Judge Kent Walston of the 58th District Court.

“Our civil judges were able to look at their dockets and determine they each could spare a week a month to hear drug cases,” said Judge West. “For the one week that isn’t covered, a retired judge will come in and hear drug cases.”

With the civil courts absorbing the drug cases, the county will no longer have to pay an additional judge’s yearly salary.

“This will save the county a lot of money,” said Judge West.

"The is a win win for the people of Jefferson County," Stevens said.

One judge in particular has been pushing for the change.

Judge Templeton, who has only presided over the 172nd District Court for a year now, ran on a platform of hearing both civil and criminal matters and has already presided over numerous criminal cases, essentially changing the way the court had operated for nearly three decades.

Judge Templeton says the civil courts are courts of general jurisdiction and by absorbing the drug cases going into 2020, it will keep cases moving and help reduce the jail occupancy.

“It’s what I promised the voters I would try to do,” Templeton said. “Our designated criminal judges, West and Stevens, are very busy. They do a great job and moving the drug cases to a designated court allows them to focus on felony crimes involving violence and serious property crimes.”

“Judge Gist was a legend,” Templeton said. “When he became ill, just as I was taking the bench, Judge Stevens and Judge West immediately went into action to ensure that his docket did not flounder. They asked Judge Walston and myself to preside over the court and keep things moving.

“That’s what we did. I don’t know the total number of cases we moved, but I’ve heard at least a couple of hundred cases myself.”

“Like I told voters ... they get a two for one with me,” Templeton said. “I’ve already been able to clear more than 400 cases from my docket and hundreds of cases from the criminal dockets.”

Judge Baylor Wortham presides over the 136th District Court, the county’s fourth civil court, and has experience in criminal law. However, his father, Bob Wortham, is the county’s current criminal district attorney, which would create a conflict of interest if he were to hear criminal cases.