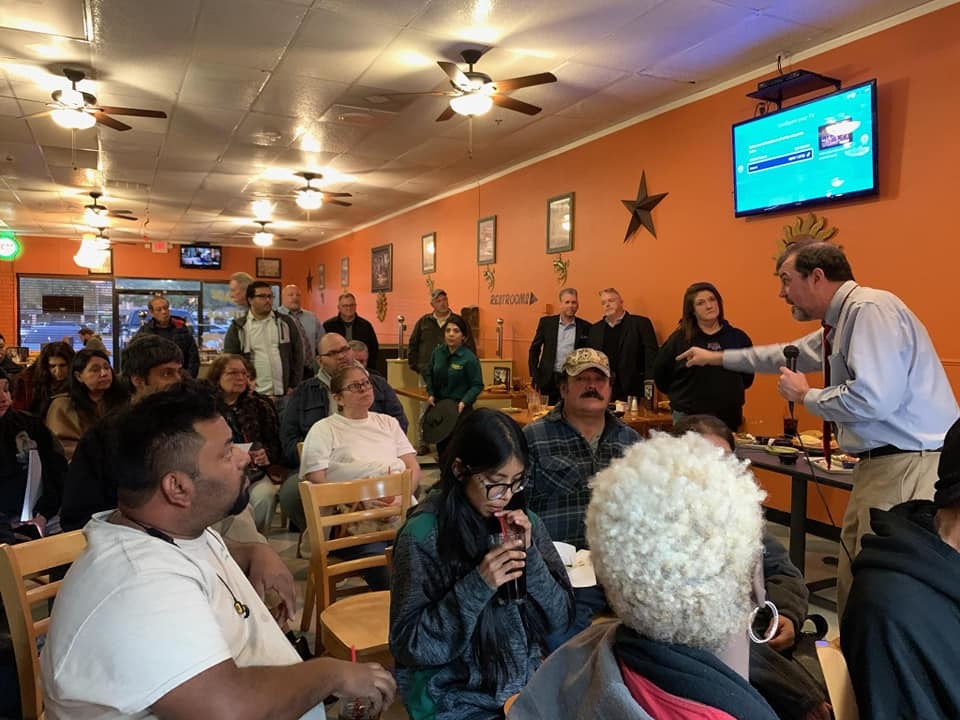 HOUSTON – Currently, there is a movement in Spring Branch to sign up residents for a lawsuit aiming to stop attorney Eric Dick and two others from “‘targeting vulnerable explosion victims.”

On Jan. 24, an explosion occurred at the Watson Grind facility in Spring Branch, damaging homes and businesses throughout the area. Lawsuits quickly followed as trial lawyers immediately began trolling for clients.

The incident even drew the attention of Tex Christopher, a self-styled community leader who has apparently been sending out text blasts promoting town hall meetings featuring Dick.

Dick has promoted the meetings on his Facebook page and plans to continue them throughout February.

“Tex Christopher, Billy Bray (an insurance agent), and Eric Dick are hosting a series of informational town hall meetings for residents who suffered from the Watson explosion,” the post states. “The previous town hall meetings have been well attended and received.”

In an effort to encourage attendance, Christopher, who doesn’t live in the community, purportedly sent out thousands of unsolicited text messages.

The actions of Christopher, Bray and Dick have sparked a movement of sorts, as a website (protectspringbranch.com) has been launched asking locals to join a lawsuit against the three individuals.

“In order to stop what is a clear abuse of our community, we are preparing to file a class-action lawsuit against Christopher, Dick, and Bray, in order to hold them accountable for their dubious actions and protect vulnerable disaster victims from being potentially taken advantage of by predators,” the site reads.

According to the site, the town halls aren’t official and merely serve as informational sessions meant to pitch Dick and Bray's services to disaster victims.

“Tex Christopher, Eric Dick, and Billy Bray's actions are in flagrant violation of the Telephone Consumer Protection Act, which stipulates that each spam message received entitles the recipient from $500 - $1500 per message,” the site reads. “You may not only receive compensation, but will send a clear message to those that would use our community as a payday.”

The Record reached out to Dick for comment. Chris Carmona, a Dick associate, responded to the request, saying the website, to him, appears to be a “fake outlet” that is being driven by an unknown law firm.

Carmona said that he believes the site to be a “classic case of case running” and that if a law firm is behind it, they “can expect the same kind of treatment.”

As far as the town halls go, Carmona said Dick was invited, which makes sense, as he’s a successful attorney who can help inform locals of their rights, and that a community leader, like Christopher, doesn’t have to be from the same neighborhood to advocate for that community.

Carmona declined to go into detail about Dick’s relationship with Christopher, saying that Dick, as an elected official (Harris County Department of Education), has lots of relationships.

If Dick is sued for spam texting, it would be the second TCPA suit against him in as many months.

On Jan. 21, Dick, who unsuccessfully ran for city council last year, was hit with a suit alleging his campaign bombarded thousands of people with unwanted text messages pushing his political agenda.