Low-Key Competence Is the Ticket for Austin’s Top Cop 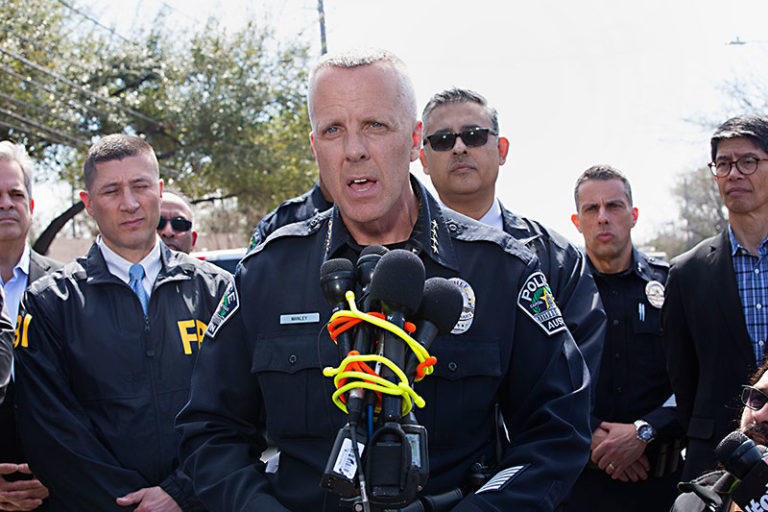 From Misrule of Law. An abridged version of this essay appeared in City Journal on May 15, 2019 as “Lone Star Exception.”

Across the country, many large cities sacrifice public safety to political correctness, catering to minority voters by hamstringing—or even demonizing–law enforcement. Some progressive cities, such as Los Angeles, San Francisco, and Seattle, openly condone urban chaos in the form of rampant homelessness and public drug use, despite local residents’ vociferous objections. Defying these trends, in one of the nation’s largest and fastest-growing cities, Austin Police Chief Brian Manley presides over the third-safest major metro area in the United States.

Manley’s success is superficially anomalous. Other major cities in Texas experience much higher rates of violent crime (e.g., Houston) or property crime (e.g., San Antonio); Austin has a relatively-small police force (around 1900 sworn officers serving a population of almost one million); and the capital city has an increasingly-progressive city government—a political environment not always conducive to public safety. But the most remarkable aspect of Manley’s accomplishments—Fortune just named him one of the “World’s Greatest Leaders”—is that he was chosen to be police chief at all.

In an age of affirmative action and identity politics, it is becoming rare for a large city in a diverse state to promote a home-grown heterosexual white male to lead a public safety department. Yet the 51 year-old Manley, an Austin native and UT graduate who joined the force in 1990, rose through the ranks to assume the department’s helm in June 2018. The unassuming Manley had held key positions—Chief of Staff and Assistant Chief—under his voluble predecessor, Art Acevedo, who left Austin in November 2016 to head Houston’s police department.  Manley’s low-key competence was often overshadowed by Acevedo’s flashy style. Upon Acevedo’s departure, Manley became the interim chief of police, but many observers expected the quota-conscious city council eventually to appoint a “diverse” outsider to replace Acevedo (who came to Austin from California). For example, amid considerable fanfare in February 2018 the progressive city council hired the 30-something Spencer Cronk, an openly-gay candidate from Minneapolis, to be city manager. With city government under the influence of left-leaning Mayor Steve Austin and councilman Greg Casar, a socialist firebrand, no one expected a law enforcement insider from Austin to be selected.  Manley was viewed as a mere place holder.

Then, in March 2018, an unprecedented bombing spree wracked Austin, terrorizing its residents and drawing national attention to a city totally unaccustomed to such horrific crimes. For nearly a month, Austin was gripped by panic as a series of bombs randomly detonated around the city, killing two and injuring four more. The only thing that kept Austin from being paralyzed by fear, many felt, was Manley’s calming presence in televised news briefings. Plunged into the media spotlight, the unflappable Manley rose to the occasion. It was his “star” moment. Slim and ram-rod straight, Manley projects a stolid, “Just the facts, ma’am” demeanor, reminiscent of Dragnet’s avuncular Sgt. Joe Friday. His professionalism, empathy, and quiet confidence—not to mention his out-of-Central Casting appearance–impressed the frightened community. When investigators cracked the case, resulting in the 23 year-old bomber—a disturbed loner with no apparent motive–blowing himself up during a police chase, Manley was widely praised for his competent leadership.

In the wake of the bombing crisis, city leaders quickly abandoned a national search for Acevedo’s replacement and instead named Manley the sole finalist. The city council unanimously approved Manley’s appointment. Manley was sworn in as chief on June 22, 2018, after serving as interim police chief for 19 months, becoming Austin’s first home-grown chief of police in 40 years. Accentuating his local roots, Manley took the oath at the high school he attended decades earlier.  His wife of 24 years, Tina, pinned him with his new badge as their two children watched. As reported by the Austin American-Statesman, Cronk said that “Brian Manley is the right person to lead our Police Department,” noting Manley’s temperament, leadership skills and devotion to the community.

A year later, Manley’s feel-good story—a real-life law enforcement version of the 1993 movie Rudy—remains fresh. He is still very popular, and despite the city council’s controversial 2018 directive that the police department cease making arrests for certain offenses, Austin’s crime rate has not increased—at least yet. Declaring itself a “Freedom City,” Austin now directs police to avoid arrests for misdemeanors, including those for smoking marijuana, having drug paraphernalia, and taking part in petty theft. Progress Texas, a leftist activist organization, reported that “Casar authored the bill, but had support from key progressive Texas organizations. United We Dream, Grassroots Leadership, and Workers Defense Project all helped lead the effort to make Austin more inclusive and equitable.” The resolution, designed to make the city “safer” for illegal immigrants and people of color, essentially exempts certain “marginalized” groups from law enforcement, a violation of the cardinal rule of effective community policing. Enfeebling law enforcement to achieve social justice is a prescription for disaster. In the first quarter of 2019, Class C misdemeanor arrests in Austin were down 63 percent from 2018. If the “broken windows” theory holds true, the council’s heavy-handed directive may jeopardize Austin’s status as the safest large city in Texas.

Many factors contribute to a city’s crime rate: community demographics, police morale, energetic patrolling, effective prosecution of arrested offenders, incarceration rates (which are declining statewide in Texas), and political leadership supportive of public safety.  Manley benefits from the fact that Austin, due to its high cost of living, has a smaller percentage of crime-prone African-Americans than other major Texas cities (and even the state overall). The promotion of an APD “lifer” also seems to have improved morale within the department. The other factors are less favorable. Travis County Sheriff Sally Hernandez (nicknamed “Sanctuary Sally”) and District Attorney Margaret Moore are both liberal Democrats not generally regarded as being tough on crime. Austin is the most liberal enclave in Texas. Not a single Republican serves on the city council. Every elected official in Travis County, save one, is a progressive Democrat. Manley serves at the pleasure of politicians not generally disposed toward law enforcement. Friction is inevitable. When Cronk appointed Manley as police chief, one of his mandates was that Manley focus on “equity and inclusion,” as if the police department is responsible for social work. Casar, who unsuccessfully fought a state law banning sanctuary cities in Texas, has made it clear that he intends to micro-manage the department’s interaction with detainees who are illegal aliens. Manley is a good cop, who has performed well in a variety of roles. He is devoted to public safety and committed to his community. In 2019, sadly, that might not be enough.

Time will tell if Manley can succeed long term in the face of Austin’s challenging political climate.  We’re not in Mayberry anymore. Want to get notified whenever we write about Travis County ?

Sign-up Next time we write about Travis County, we'll email you a link to the story. You may edit your settings or unsubscribe at any time.