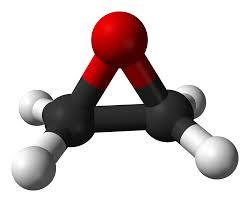 BEAUMONT – There are no shortage of chemical plants and refineries in Southeast Texas, making the region a choice target for toxic torts over the past several decades.

And while lawsuits alleging that benzene or asbestos exposure caused a plaintiff's cancer are still routinely filed at the Jefferson County courthouse, rising concerns over ethylene oxide exposure could mean a fresh wave of toxic torts might be rolling in once again.

Ethylene oxide (EtO) is a man-made chemical primarily used in the production of several of industrial chemicals. It’s also used as a fumigant as well as a sterilant for medical equipment.

The EPA has concluded that EtO is carcinogenic to humans by inhalation and that exposure increases the risk of lymphoid cancer and, for females, breast cancer.

The Texas Commission on Environmental Quality, however, is not convinced and presented a strong counter argument during a medical device sterilization conference in December.

Jefferson County, which is highly industrialized, has more EtO emissions on a square mile basis than any other county in Texas, with over 300 times more than the U.S. at large, according to TCEQ.

“The incidents of leukemia, non-Hodgkin’s lymphoma, and breast cancer are lower in Jefferson County than in the general U.S. population,” states TCEQ’s conference notes.  “In fact, breast cancer incidence is statistically significantly lower in Jefferson County compared to both Texas and the U.S., despite EtO emissions that are 60 times higher than Texas at large and 307 times higher than the U.S.

“Based on USEPA’s 2016 assessment, the exact opposite of this reality would be expected.”

TCEQ argued that the “ill-founded concerns” about the carcinogenic risk posed by EtO do not stem from its carcinogenic potency, but rather the EPA’s “scientifically flawed assessment.”

For the past couple of years, EtO lawsuits have already been pouring into courthouses near Chicago.

In Cook County, medical device sterilization company Sterigenics faces about 75 personal injury lawsuits, with more being promised by plaintiffs' lawyers, over that company's EtO emissions from its sterilization plant in the suburban community of Willowbrook, west of Chicago. The lawsuits blamed the EtO emissions for plaintiffs' cancer, and a generally increased risk of cancer. The lawsuits relied heavily on the EPA's EtO classification and a resulting report from the federal Agency for Toxic Substances and Disease Registry, which linked EtO emissions to a heightened cancer risk in the region around the Sterigenics plant.

That plant was shuttered in February 2019 by an order from the Illinois Environmental Protection Agency under Democratic Gov. JB Pritzker, in response to ratcheting political pressure from a bipartisan group of lawmakers and activists.

Sterigenics contested the action as unconstitutional, noting the state never demonstrated it had violated clean air laws or emission limits set by its operating permit. And Sterigenics ultimately secured a deal with the state of Illinois, allowing it to potentially reopen, subject to stringent emissions controls. However, the company ultimately opted to leave Illinois, amid continuing attempts by lawmakers and activists to undermine the settlement and find a way to prevent them from reopening.

In 2019, Medline Industries and Vantage Specialty Chemicals, two other companies that use EtO to sterilize medical equipment, were hit with similar personal injury suits in Lake County, Ill., north of Chicago. The plaintiffs similarly accused those companies of polluting the air and causing cancer.

Late last year, the University of Illinois at Chicago released a report finding that the Lake County residents living near the Medline plant had elevated levels of EtO in their blood.

However, Gail Charnley, a toxicologist researching EtO sterilization, recently responded to the report, stating that the tests showed EtO levels were “squarely within the normal range.”

Despite the mixed opinions, some Illinois lawmakers are now working to ban the use of EtO outright in the state – a move that industry groups argue would hurt the economy and health care.

So what does this mean for Texas?

At one time, EtO lawsuits were indeed being filed in the state, but the Texas Supreme Court increased the level of scientific proof required in 1997, effectively ending the trend before it had even really begun.

For nearly three decades, Tina Bradley, a partner at Hobson & Bradley, has handled toxic tort cases. She told The Record that she stopped pleading EtO causation in the late 90s because of the harder burden of proof.

Although man made, EtO isn’t a new chemical and was even used in the making of mustard gas during WWI.

“To say that ethylene oxide is a poison is an under-exaggeration,” said Paul “Chip” Ferguson, founder of The Ferguson Law Firm in Beaumont. “This is a very dangerous substance – it kills and debilitates indiscriminately.”

Ferguson said he believes the Trump Administration’s “business-first” attitude makes any meaningful safety regulation very unlikely in the near future.

Meanwhile, companies fighting a new wave of EtO litigation can lean on scientific research conducted by the TCEQ.

In a study published last year, "Ethylene Oxide Carcinogenic Dose-Response Assessment" the TCEQ, among other things, observed that the "statistically significant overestimation of risk...undermines accurate risk communication and can lead to unintended societal consequences."